When it comes to taking responsibility, not everyone in Sports is willing to play the game. There are good reasons to dodge the ball, but also very bad ones.

The line between victory and defeat is a thin one. Very small decisions can make the difference between wins and losses. Especially in sports: One goal in the very last minute decides the football game. One false step after years of train­ing leads to an injury before the final sprint. One competitor celebrates a vic­tory; the other, only meters away, cries in disappointment.

This March, there was a similar situa­tion. Formula One opened its season in Bahrain. There were thousands of visi­tors and dozens of media outlets on hand. The loud, happy, glamorous world of motor­sport was on dis­play, just like in the good old days. Yet just a few kilometres away, riots on the street were crushed by the police. Here, too, the line between happiness and desperation was a thin one.

This Sunday in March serves as a per­fect symbol: Sport, at least at the profes­sional level, is far more than just a game. It is dealing with the same risks govern­ments, organisations and companies face every day. It is embedded in a com­plex world along with politics, threats and business relations. But as the conver­sation about sport this spring suggests, it has not found its appropriate role yet.

It might be attention that counts
It is just a game, some people say. And they have arguments on their side. The first is a solid one: Sport shall not be po­litical. Joseph Blatter, President of the world football association FIFA, is still proud of introducing organised football to the Palestinian territories years ago. He is proud that he helped bring the first football world championship to Af­rica. “It is far more than entertainment, it is emotion!” he told an audience at the St. Gallen Symposium. 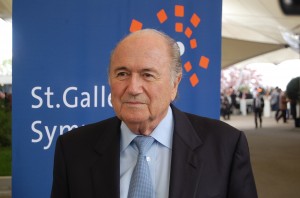 There is a second argument, which suggests that sport can even help im­prove difficult political situations. Huge events always bring a lot of atten­tion to the host country, and may shine a spotlight on its problems. That was – partly – the case before the 2008 Olympics in Beijing. And there’s no question that without the Euro 2012 championship this summer, far fewer reports would have discussed the politi­cal situation in Ukraine.

By now, the championships have be­come a political event, without a doubt. The European Commission, not famous for being big football fans, announced that none of their members will visit the tournament. Joseph Blatter stuck with his opinion that the Euro has to take place exactly as planned, and that Europe’s politicians have to represent their countries. “You have to play,” he says. “And you have to go.”

It is money that counts
So is sport an independent social event? Former political disagreements, like the 64 states that boycotted the 1980 Olympic Games in Russia (and the 18 states which boycotted the Los Ange­les Olympics four years later) seem to be mistakes from another era. But there is one severe problem with this logic, be­cause it does not pay attention to the fact that the universe of sport has devel­oped over the decades. The impact of sport, especially football, stopped being a local event many years ago. The not-so-new challenge is money.

About one week before the St. Gallen Symposium started, FIFA published its financial statement for 2011. Reading through the 98-page document felt like reading a publicly-traded company’s an­nual report. The organisation an­nounced revenue of more than USD one billion, with a profit of USD 36 million. That’s money the sport needs, Blatter says: “We need this money to develop football and make it more global.”

Yet more money brings more prob­lems. Let’s look again at football: Huge discussions accompanied the decision to give the next World Cups, in 2018 and 2022, to Russia and Qatar. People were accusing committee members of being corrupt. Transparency was low. It shall be improved, Blatter promised at the symposium. The next decision shall be made by more delegates, maybe even in public.

It is a first step in the right direction. If football, Formula One, and other sports adopt strategies like this, they will suc­ceed in the business part as well. It is far more difficult to find the right strategy for dealing with political conflicts. What is asked is more courage of participants. Besides the large organisations, they are the ones who make sport come alive. The word of prominent players, athletes and drivers has a huge impact. Whenev­er they can address problems in public, they will increase pressure on sports or­ganisations. Taking part is what counts, goes one saying about the Olympic Games. Figuring out how to do so is the challenge well-organised, well-financed sports face. If they fail, there may be far more losers on the other side of the thin line.